Minister of International Cooperation; Dr. Rania Al-Mashat, accompanied on Friday, a high-level delegation of the World Bank executives, on a tour of the Pyramids, in the presence of Dr. Zahi Hawas, Egyptologist and former Minister of Antiquities.

The members of the World Bank delegation listened to an explanation from Dr. Zahi Hawas about the features and history of the archaeological pyramids area during their visit to the Sphinx statue.

They got acquainted with the pyramids development project, which will be linked to the Grand Egyptian Museum, and will include raising the efficiency of the entire region and providing it with all the services that a tourist needs From hotels, restaurants and others.

The World Bank delegation expressed its admiration and fascination with the greatness of building the pyramids and the geniality of the ancient Egyptians, and the project to develop the pyramids region, which will make this integrated tourism area topping the global tourism map, and at the end of the visit, Dr. Zahi Hawas presented a number of his books with his signature to each CEO.

After that, Al-Mashat accompanied the members of the high-level delegation of the World Bank executives to the Grand Egyptian Museum, and the World Bank delegation listened to an explanation about the Grand Egyptian Museum that the Japanese Agency for International Cooperation contributed to establish, and the artifacts transferred to the museum are reported from all the archaeological sites and museums 49,603 pieces, and what has been restored and maintained amounted to 46,600 artifacts, and the most important pieces included in the museum are the statue of King Ramses II in the Great Lobby, and statues of King Thutmose III, and Amenhotep III will be in the main exhibition halls.

The minister also explained that what distinguishes the Grand Egyptian Museum from other museums is its location a hundred steps from the pyramids of Giza and its largest collection of monuments in the world, each telling an interesting archaeological story of different Egyptian civilizations.

Members of the high-level delegation praised the executives of the World Bank, the rapid establishment of the Grand Egyptian Museum, and the proximity of Sphinx Airport from it, which is 12 kilometers from the museum, which enhances the blending of cultural tourism and beach tourism through flights connecting the cities of Egypt, expressing their aspiration to open this The project during the current year. 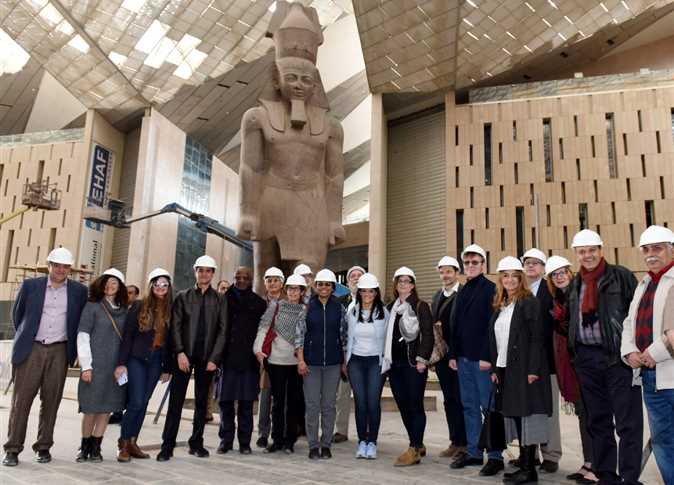